Max was a project manager who worked on a daily rate contract basis for large multinational tech companies. He was in his early 30s and single with no children. He had travelled and tried a number of jobs but he was now at a stage where he was ready to settle into tech as a career. He had been advised by his accountant that a limited company structure was the most tax efficient way to operate. He was keen to learn about optimising his tax situation.

A friend referred Max to Bellwether Financial Planning and he was impressed by the company’s five star rating on Google. The company’s offices were also in a convenient location close to work.

Max’s main aim was to find legitimate ways to reduce his tax bill whilst also providing for his future retirement needs. He was also aware that he needed to protect his earning capacity as daily rate contractors are particularly exposed to a loss/reduction of income in the event of ill health.

An integral part of the Bellwether 360° service is to plan ahead to meet the financial requirements associated with the lifestyle the client aspires to. This means taking time to explore what sort of life they want to lead. During this process, the client explained that it was a top priority to protect the income that allowed him to enjoy his current lifestyle. He also expressed an interest in potentially retiring early and laying the foundations for future expenses such as marriage and costs involved in having children, e.g. education fees and leaving a legacy tax efficiently.

Max indicated that he was open to taking medium to high risk investment strategies.

Max was in an exposed position, having just exhausted the bulk of his savings on a house purchase and having no real buffer. He was aware of the need to build up his savings reserves again. His current earnings more than met his living expenses, in fact there was a surplus of income on a monthly basis.

Max earned a daily contractor rate of €650 which equated to an annual turnover of €156,000. He had a mortgage on his apartment in Dublin 14 and a car loan. He had no investments and no pension arrangement established for his current contracting, although he had two deferred pensions from previous employments.

Max had the active social life of a single man, with high outgoings on social activities, travelling and his mortgage. He was, however, aware that he would need to rein these back and apply his surplus income to a new financial plan in order to meet his aims.

Max had no protection in place other than mortgage protection for his new apartment.

Max’s lifestyle and future aspirations revolved around his ability to earn an income. With daily rate contracting, if you don’t work, you don’t get paid. This highlighted the need to protect these earnings by establishing an income protection plan, paid through his company.

We also implemented a specified illness policy, which would pay a tax-free lump sum, equivalent to twice his salary, in the event that he was diagnosed with a major illnesses.

Life cover was not a current requirement for Max as he had no financial dependents.

A savings strategy was devised, comprising of a two part plan to build up a short term, “rainy day” fund, to replenish the funds used for the apartment deposit and also medium term savings for a wedding and future children’s education funds.

Max was drawing all his contractor earnings, less sundry expenses, from the limited company which meant that he was paying c. 52% of tax on most of his salary. However, by helping Max identify what was needed to meet his lifestyle goals, we were able to advise him of the gross salary (before tax) he needed to declare to provide him with the net take home pay required.

The funds not drawn from the company were redirected to a pension plan. Employer pension contributions were made directly from his company to the pension, with no tax implication for himself. Using our cashflow projection, we could ascertain that this pension funding, if it continued to retirement, would provide the majority of the income he would need to meet his forecasted retirement expenditure.

An option that was deferred, but considered for future tax years, was the purchase of an electric company car with the additional perk of zero benefit-in-kind taxation.

With our new financial plan in place, Max was able to maintain his current lifestyle whilst still planning ahead for a future wedding and cost of educating children. Max felt much more secure knowing that his income and future lifestyle goals were protected in the event of illness. He also had peace of mind knowing that he would be able to maintain his standard of living after retirement. It also became clear that he would be able to retire early at age 60 and still have sufficient cashflow to meet projected living expenses to mortality age 95.

eBook: Get our Financial Planning Tips eBook for Contractors 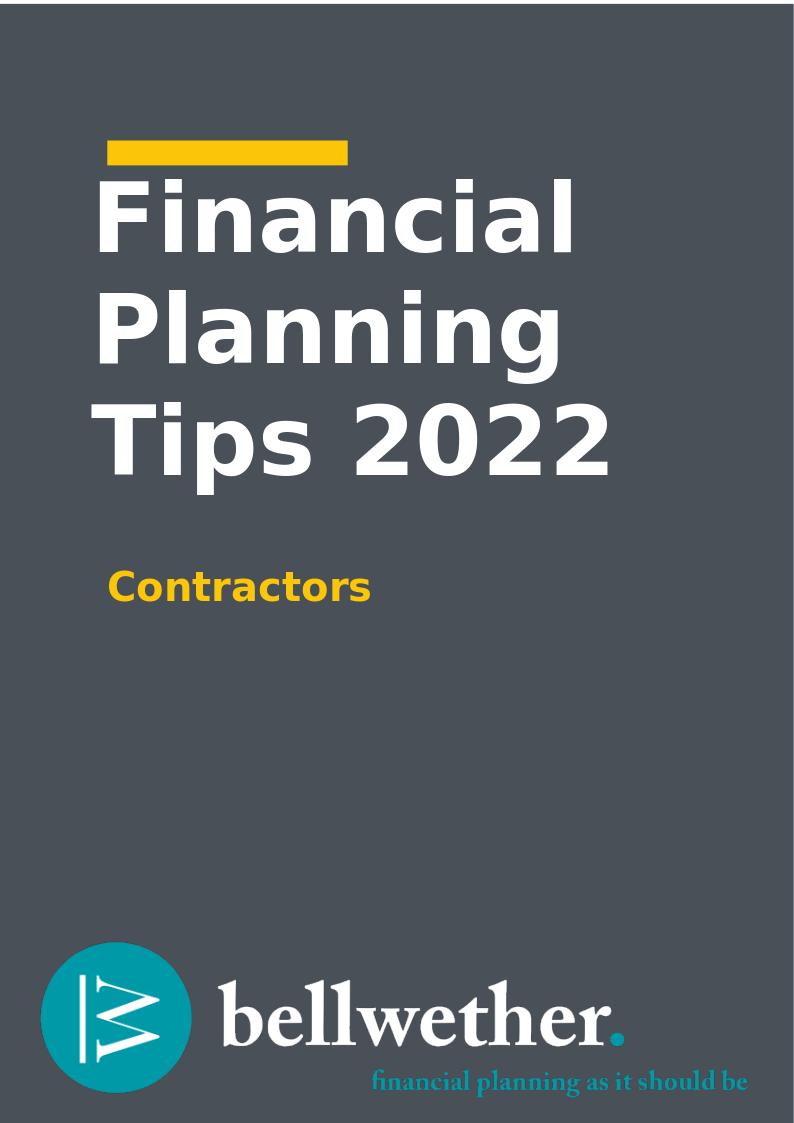